Angie’s birthday and the day after

So after leaving the Neko Café we are walking back in order to celebrate Angie’s 21st birthday. If you want to know how crazy this night was, and how terrible we felt the day after you should continue reading!

We are on our way back to Inari station and I’m keen on eating Ramen again. Malie can’t say no and Angie has no chance to think of any excuse quick enough, so we’re walking to Gion. When it comes to Ramen my sense of orientation is brilliant, I can find the restaurant which we’ve visited on saturday immediately. A pity it’s closed and we don’t know why. Somebody is cleaning the tables inside so we assume that we arrived too early and that the bar will open in a few minutes. We’re walking around the corner and we’re pretty hungry by now. When we come back to the restaurant half an hour later it’s still closed and Angie is almost losing her mind. Malie wants to have Ramen also so we can convince Angie to wait just a little longer. We sit down in a smoking area and we’re checking Ramen bars in Gion on Google, just in case our bar won’t open within the next few minutes. The one we’re wanting to eat in was suggested as number one and so we can read that it’ll open in only 20 minutes, that’s why we keep waiting outside. There must be something going on tonight because there are dozens of pretty Japanese men walking around and we’re freaking out a little everytime we spot an extra hot cutie.

The bar is opening at half past six and we can finally get in and sit down. We already know what we want to order so it doesn’t take long until we can finally eat the most delicious dish that this planet earth offers. Malie and me are paying the bill and Angie picks up a huge amount of beer in a Family Mart near the restaurant. We already know that this evening is gonna be accompanied by lots of alcohol. On our way back to the hostel there’s an old Japanese man talking to us. He asks where we come from and tells us that he has been to Vienna five times and to Salzburg three times already. After leaving us he says “In Japan we say: Auf Wiedersehen”. How cute was that? Malie and me are still in the bathroom while Angie already sits at the rooftop terrace with the guys. When we arrive they have already had one beer and it’s time for us to catch up. Malie brought childish party hats which we’re wearing xD It’s still pretty warm outside and we’re enjoying the view over Kyoto. Sadly the hostel staff begs us to leave because the terrace will be closed soon. Maybe it’s better like this, who knew if this would have ended like the movie Hangover xD We’re now sitting down on the balcony instead. 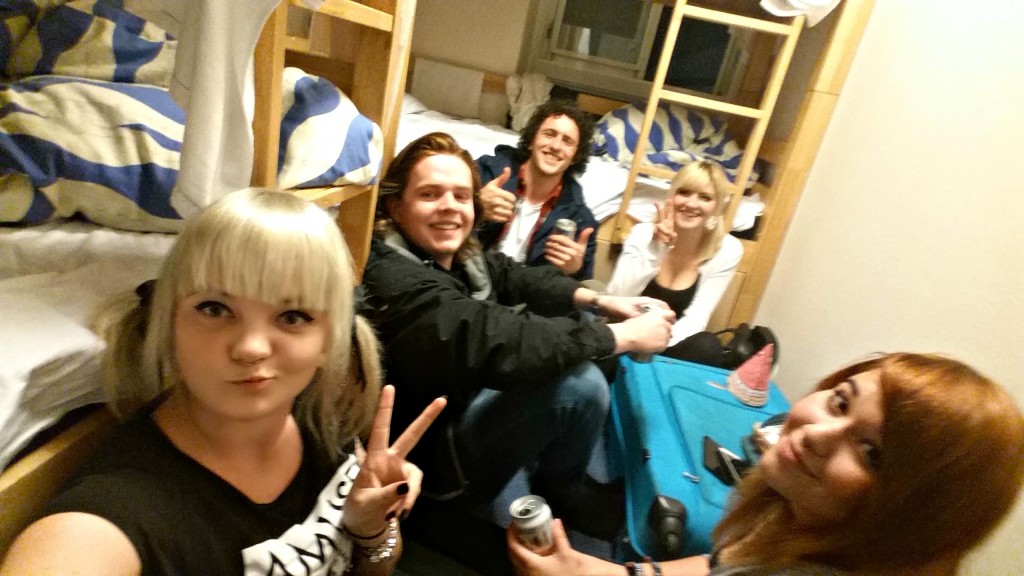 At 10:oopm the staff also closes the balcony so we’re not sure where to go. Nick suggests to go to the fire exit stairs where we can smoke and drink without boring people staring at us. The three South Korean guys from the other table are joining us. We already feel tipsy and we’re going through several options. It’s slowly getting colder and you just can’t celebrate a 21st birthday on the fire exit stairs. Tom and Nick have been to a bar yesterday and they want to take us there. The Korean guys want to come with us, I guess, their English skills are almost non-existent. At least they try to sing a happy birthday song for Angie. I am not sure where we are exactly so I hope that the guys still remember the way back to the hostel. We’re walking to the bar altogether and it takes us, I’m not quite sure but I guess, about 30 minutes to arrive there.  We’re having one or two glasses of beer and we’re talking about music, Game of Thrones and our tattoos.

After finishing our drinks we’re walking to another bar. I have no memory of what we were talking about at all, Malie also has no clue. Only Angie remembers every detail. I hate Japanese alcohol. Malie and me are somehow making out while Angie keeps filming us, afterwards we’re sending the videos to various people… I HATE JAPANESE ALCOHOL!!! God, so awkward! The owner of the bar wants to close at 02:00am but we can convince him to let us stay until 03:00am. Afterwards we’re wiggling back to the hostel. Angie and Nick are buying some more beer at the konbini while Tom, Malie and me are having a conversation in the living room. I’m not sure if you can still call this a conversation but well. After returning from the toilet everyone is gone. I can’t find Angie nor Malie so I’m walking back to our room to get some rest, I’m completely done anyway. The next day they told me that the party was continued on the fire exit stairs with shitloads of beer but they completely forgot about me so you can imagine how drunk we/they were. No need for an enemy if you call these guys your friends xD At least they had fun and I got some sleep!

It’s already midday when we wake up for the first time. Our roommate has already checked out and we’re completely done. The cleaning staff comes in in order to vacuum clean the room. Angie, sleeping in the bed next to the door, asks him if he really has to do the cleaning right now. Her voice sounds like she’s almost crying. The staff apologizes but continues working. It feels like when we were hungover for the first time in our lives and our moms entered the room to clean up nevertheless. Angie begs him to stop so he turns off the vacuum cleaner and leaves the room. He’s coming back in about four more times and makes noise but after he has picked up every single dust particle with his hands he leaves us alone. I hate everyone when I’m hungover so I don’t say a word and I just stay in bed. Malie and Angie are buying 6 liters of water in the konbini near our hostel and when they return I feel better. We realize that my phone is now set in Korean and Malie can’t find her jacket anymore. We’re laughing so hard, what a night xD At least Angie is here with us, some of our friends already feared that she could get lost while celebrating her birthday.

After we finally move our lazy butts out of bed we want to grab something to eat. I realize that the key for my shoe locker is gone, oh snap! The hostel staff opens the locker for me but my second pair of shoes is missing, what the…?! I need to pay ¥1.000 for a new key and I hope that my shoes will return. The staff at the front desk suggests a restaurant with English speaking staff which should be near the hostel so we’re heading towards the right direction. When arriving at the restaurant we are quite surprised because nobody seems to speak proper English here. We order anything from the menu because we have no idea what they offer. After eating we are walking back to the hostel, it’s raining and we’re tired. But my shoes have returned, yay! Somebody must have picked them up, thank god! Our clothes are still smelling because of the drying socks of our roommate so we decide to wash them. Afterwards Malie tries to open our window for the fourth time but it still doesn’t work. We are asking the staff if there is a chance to open the window and they tell us there is, you only need to slide it a bit more harsh. That’s when we realize that we’re in Asia, not in Europe. Windows need to be slid in order to be opened, whereas Malie has tried to pull it towards her. If only we knew that before. At around 09:00pm we are going to bed, the last night was way too exhausting and we need to get some more sleep. Oyasumi nasai!