Let’s continue this (never-ending) journey. If you want to know how drunk we got in the first evening of our stay in the hostel, and if you’re interested in how long it takes you to reach Kyoto from Narita International Airport then read the following post 🙂

Our alarm goes off at 06:30am and god, we’re tired! We’re taking a shower one after another and we repack our luggage. The front desk told us that we can make use of a free transfer bus to Narita International Airport, what a nice offer! Angie and me are going outside in order to fully get awake by having some coffee and a cigarette. While flicking through Facebook we realize that something terrible must have happened in Europe. After some research we learn about what happened and we’re shocked. Our mood is worse than ever because of the terror attacks in France. But to be honest, we’re just too far away to clearly realize what is going on. After we’ve calmed down we are watching some Japanese men doing gymnastics while wearing a hat. Just like in the movies xD We get on the bus after the men finish their exercise. It departs at 08:15am and we’re stunned looking out of the window. We keep enjoying the view although it’s raining. The first thing we do at the airport is walking over to the post office where our SIM cards for mobile internet access should be waiting for us and f*ck yeah, they are. After struggling with the use of this SIM card in march we’re quite sure that we’ll gonna make it on our own this time, but we fail again. At least we manage to install everything without asking the Docomo staff. We’re heading to the JR ticket counter and nobody is lining up ahead of us, yay! It only takes a few minutes to exchange the Japan Rail Pass voucher and to make a reservation for the trains. 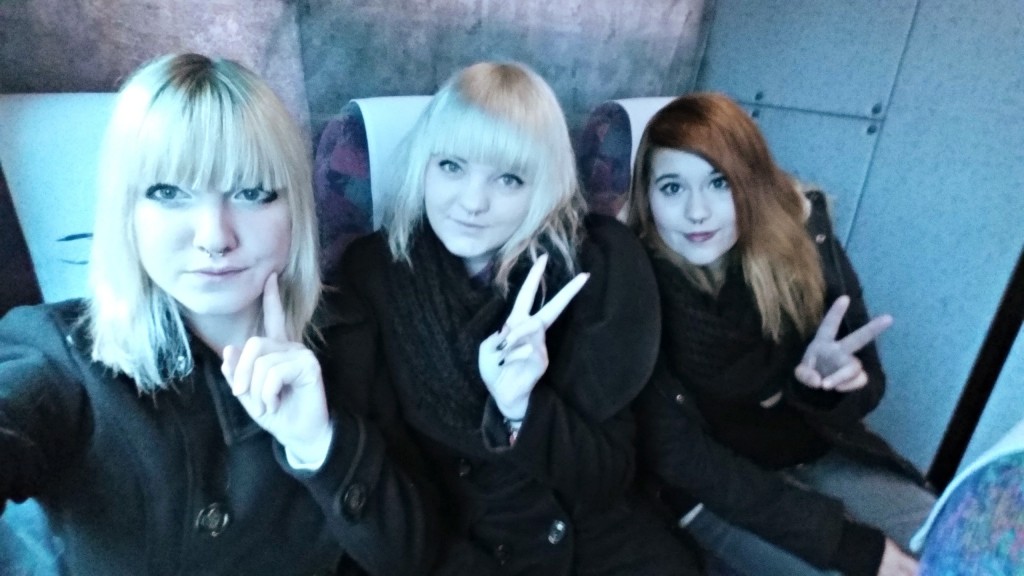 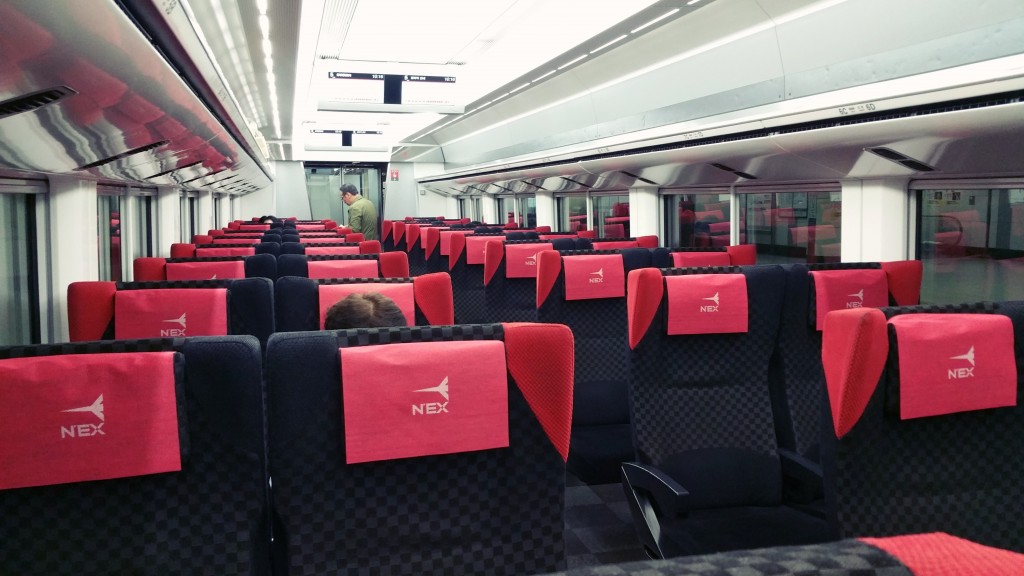 Thanks to the Japan Rail Pass we’re able to use the N’EX for free again. First of all I show Angie the amazing toilet in this train, I have never seen such a toilet before! After one hour we arrive at Shinagawa station where we change into the Hikari Shinkansen. Going to Kyoto takes somewhat between 2 and 3 hours and we’re looking out of the window most of the time. I’m still impressed that there’s a smoking area located in the Shinkansen so Angie and me are grabbing the chance in order to smoke INSIDE A TRAIN! Malie stays at her seat, she’s not feeling good. After 2 hours and 40 minutes we arrive at Kyoto station. God, how I hate this place, it’s just a huge maze. We arrive at the “wrong” side of the building and now we need to search for the right exit. Wouldn’t be that much exhausting if we didn’t have to carry our heavy luggage. It started raining cats and dogs in the meantime and we’re quite lost. I am pretty sure that I know the way to the hostel since I’ve walked this way a several times via Google Street View already. Sadly I can’t remember much more than “straight until Starbucks” xD Angie activates Google Maps and we hope to find the way soon. The GPS is guiding us anywhere but not in the right direction. After ten minutes of walking we realize that the way was completely wrong.

We stop at a Mini Stop. My backpack with my Macbook inside is wet already and I don’t wanna walk any further. We ask the staff if they could call us a taxi but they refuse to, I don’t know if they simply didn’t understand what we wanted, or if asking someone to call you a taxi is considered as a highly impolite action. Angie puts her jacket over my backpack and I look like Quasimodo while searching for the right way. The GPS keeps telling us it’s only four more minutes since half an hour, but finally we can spot the hostel in the distance.

We have to take off our shoes at the entrance, afterwards we can walk over to the front desk. We pay the outstanding amount of money and they staff gives us our room key. They give us a key to lock up our shoes at the entrance additionally and if we lose it, we need to pay a ¥1.000,- fee. We’re still laughing at this point. Before going to our room we get some typical Japanese slippers. We booked ourselves in a four-bed-room because we hoped that we could stay there alone. When we enter the room we see that one bed is already occupied and we’re disappointed somehow. There are socks hanging on the bed. Malie smells at them and tells us that they’re definitely not hanging there for drying. That explains the stinky smell in our room. While unpacking our suitcases our roommate walks in. He talks with his eyes closed and is humming all the time. Well that’s gonna be fun. He comes from Guatemala and is an albino obviously, we don’t know more about him because he seems to rather be on his own. Malie tries to open our window for the first time but she fails to do so, hell yeah… 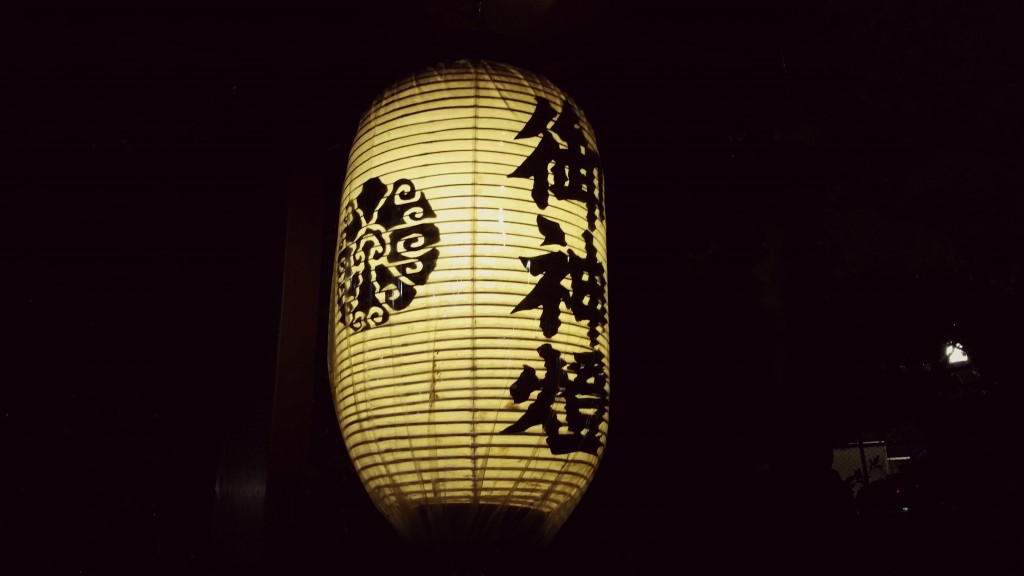 After taking a shower we want to go to Gion. It’s still raining but we don’t want to waste our time in the hostel. On the way to Kiyomizu Dera we spot some Japanese men, controlling the traffic with a uniform, a lightsaber and something like Christmas decoration around their bodies. I mean, why would someone pay guys like these to control the crosswalk when there’s a traffic light? Oh, Japan… xD We buy some postcards and souvenirs and then we want to go to a Ramen bar, but somehow we can’t find a proper one. Shortly before Angie is freaking out completely we enter a dubious Ramen bar and sit down. Sometimes walking inside one of those bars in a fucked up lane is the best thing to do because even if the menu is small, our Ramen was the most delicious I’ve ever had. Angie can’t eat with chopsticks properly at this time, but she tells us she’s in food heaven so eating Ramen a bunch of times should work out. After eating we grab some beer from the konbini and then we’re heading back to the hostel. 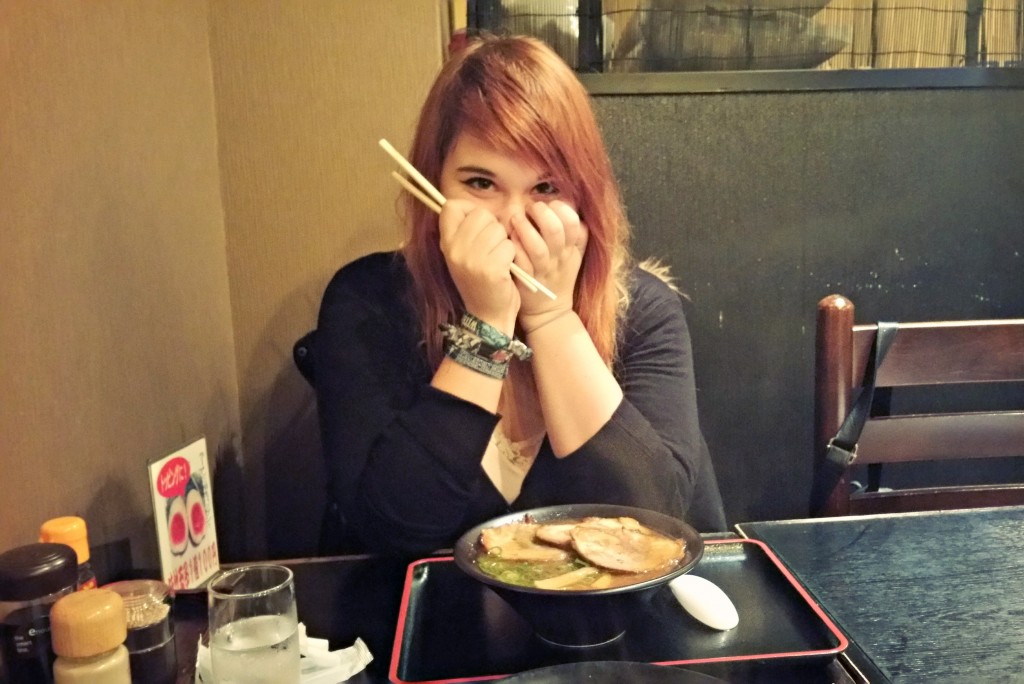 Malie is still sick and she goes to bed early. Angie and I decide to have some drinks in the Zen bar, located inside the hostel, while writing our first postcards. We meet the most amazing bartender ever, she’s such a cutie! With two Cuba Libre the postcards are almost writing themselves and we convince Malie to join us. Since the bar is closing at midnight we order some drinks to go and walk over to the “living room” of the hostel. We thought that there’s gonna be a lot of party people from all over the world who are communicating with other guests but nope… We find ourselves in a room full of families and people who obviously want to read or surf the internet instead. We’re having a lot of fun nevertheless and we meet a Japanese guy who’s living in the hostel. We’re talking to him for hours and at around three in the morning Angie and I find ourselves somewhere beyond reality. Malie is sleeping already and I guess we had enough beer for tonight. If only we knew what would happen in the next few days… 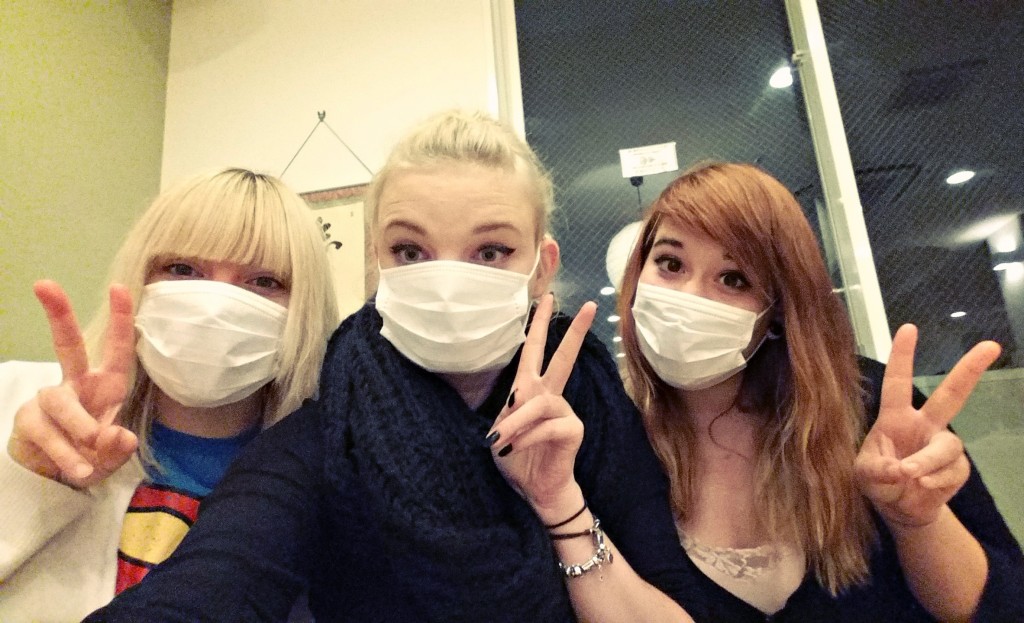