So this is part 1 of my travel diary from our Japan trip in november 2015. You want to know how exhausting it is to travel long distances with cheap tickets and which cool band joined us for a cigarette in Narita? Then you should read the following post. Enjoy!

I knew that I won’t get a lot of sleep this night. I suffer from aerophobia and even if it already got better over the years it’s still kind of a handicap for me. Angie picks me up from my apartment at 09:00am and we buy all the things we could have bought in the last weeks already but well, that’s us xD Afterwards we’re heading back home to recheck our luggage. Luckily we’re leaving Austria in the evening so we got a lot of time to pack our bags on the day of departure. In the early afternoon Angie picks me up again, it’s now time to leave. Her mum is giving us a lift to Salzburg Airport and I can’t believe that we’re really going (back) to Japan in a few hours! When we booked our flights there were still 202 days to go. Unbelievable, I’m so excited! 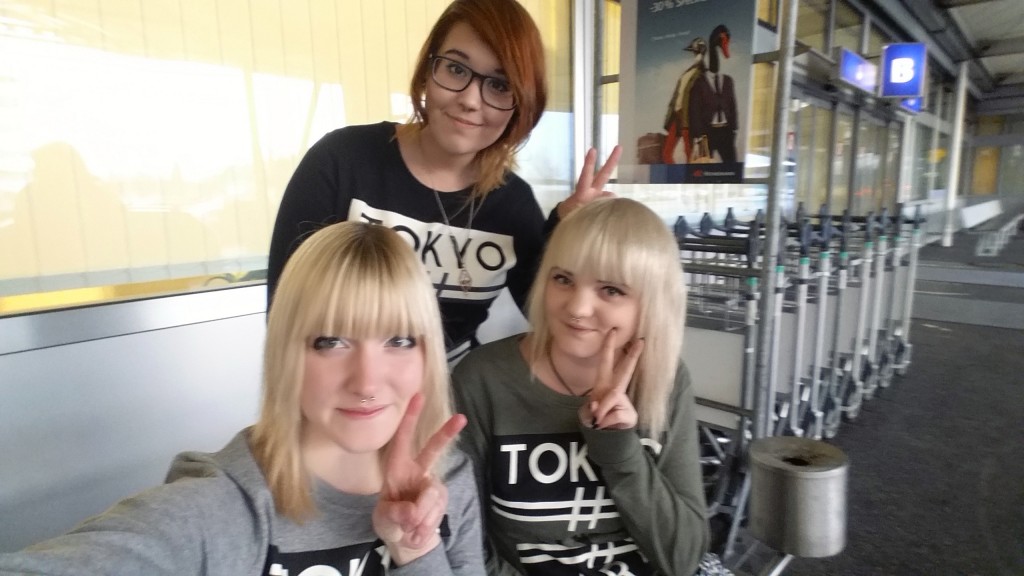 When arriving at Salzburg Airport we meet Malie and her parents. Angie and I are quite much panicking because we’re afraid of suffering from a thrombosis which could probably occur because of our smoking behaviour, so Angie’s mum gives us an injection to prevent a catastrophe like this. We somehow feel like junkies when searching for a vacant toilet while carrying our vaccine with us xD The injection hurts more than expected and we’re hobbling back to Malie in order to say goodbye to their parents and Angie’s mum. Well, and now we’re sitting here, wearing a scarf and a winter jacket while waiting for our flight. If you have ever been at Salzburg Airport then you’ll know that there won’t ever be more than two passengers lining up ahead of you at Check-In. We’re the only passengers at security control either – that’s what I call airport feeling! Time passes quite fast and we’re boarding the plane on time. Angie is sitting at the window seat and completely freaks out. She has never been any farther than London so she’s leaving Europe for the first time in her life tonight.

We get free catering and Angie can’t believe her eyes. Every single detail seems to be so exciting for her and I can’t wait to show her my beloved Japan while watching her burst into tears of joy. After 2 hours and 30 minutes we arrive at Istanbul Airport. Just like last year I can’t get to like this place. Everything seems to be sordid and dirty and our mood isn’t that good anymore. We are making our way to the smoking area and it feels quite uncomfortable, there are no women around, only men, looking at us as if we were aliens. A Swedish lady joins us for a cigarette because she feels the same. She’s on her way to Ceylon and tells us that she has been working in a small Austrian health resort where Angie went to school, it’s really not far from our hometown. How small is this world? After the lady leaves we continue talking in German and suddenly we hear some guys saying “Hey, Austrians, right?”. They ask where we come from and are quite surprised when they hear that we live in the city next to their hometown. HOW SMALL IS THIS WORLD AGAIN???

After a short conversation we’re heading to the Sky Bar where the barkeeper is completely screwing us over. I’m gonna take some Turkish Lira with me the next time for f*ck’s sake. (Thats what she said while she already knew that she’s not gonna do it). After falling into dirty conversations about any guy we’ve ever dated it feels as if time is running. We’re looking for our gate and we’re leaving Malie there, Angie and me are running back to the smoking area where we meet our Swedish friend again. It’s boarding time shortly after and the plane departs at 01:00am local time. 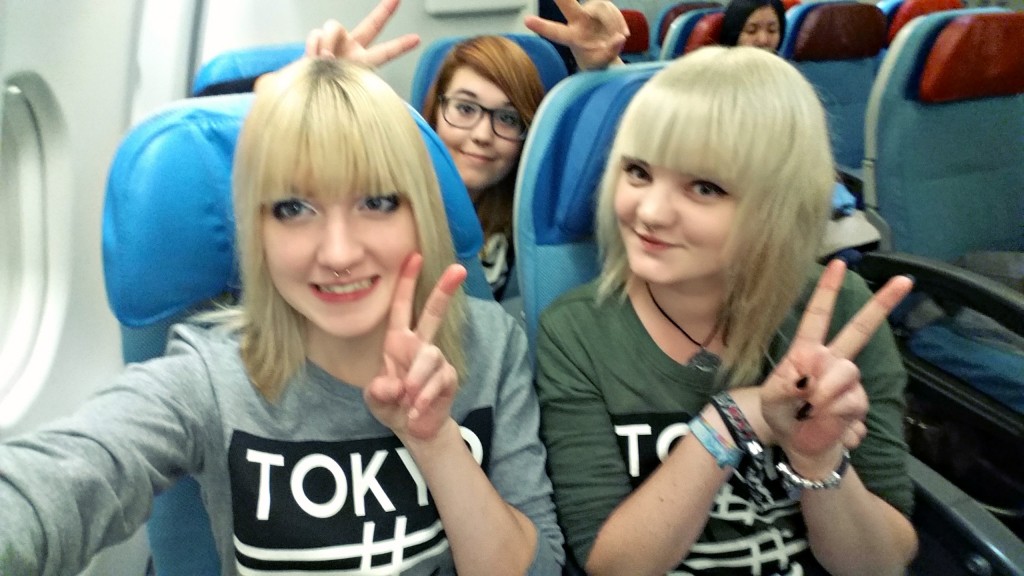 Angie and me are looking for Game of Thrones in the entertainment system but we fail to do so. At least they offer this movie called “Pompeii” with Kit Harington and we’re confident – Jon Snow is saving our flight! Well, not really, because the movie sucks and I’m falling asleep shortly after the middle. I thought it was clever to book vegetarian meals for us and we’re quite stoked about our upcoming dinner but just like in the other plane we’re having eggplant, ugh. Angie is sitting behind us and there is a Japanese businessman sitting next to her. He’s watching Hentai on his tablet and Angie doesn’t dare to talk to him all flight long. Her earphones are broken and she really needs to go to the lavatory – I wonder how she could stand 11 hours without asking this guy to stand up??? Malie is watching one weepie after another and I keep sleeping until our “breakfast” (it was dinner time actually) arrives around two hours before landing. Eggplant again, yay!

And then there is this wonderful feeling when you’re leaving the aircraft after a long haul flight. I know, this feeling is great anywhere in the world but at Narita International Airport you’re stepping on the most comfortable carpet that you could ever imagine. Must sound odd if you’ve never been there, but this carpet is my first contact with Japan every time I go there and it’s also one of the uncountable details that make me realize I’m finally (back) in Japan. The immigration seems to be never-ending this time and we only want to leave the airport to breathe Japanese air right now. Malie tries to reach for my suitcase at baggage claim but she fails, so this nice German guy is helping her. After we grabbed our bags we’re running over to the smoking area. We meet the German guy inside the smoking cabin again and Angie is talking to him and his friends because she believes to recognize them from any YouTube video. And indeed, they are TO THE RATS AND WOLVES! Angie’s fangirl heart is beating faster and we help the guys to go to Shinjuku station. How cool is that??? We’re not even on our way for 24 hours and we have already met so many people!

When connecting to Narita free wifi for the first time the first thing I see is Michael’s “pretty cold here, right?” text. Are you kidding me? I have been calculating the date of our trip precisely for months and I thought the weather is gonna be good. When we’re leaving the airport we realize that compared to Austria it’s not cold at all, phew! No need for a winter jacket in Japan! The JR counter is closed already so we purchase a regular ticket in order to go to Narita station by train. After two stops we arrive and we have no clue where to go. I’m asking a taxi driver to bring us to our hotel but he explains that it’s only five minutes by foot and that we should spend our money on something else, aww :3 While carrying our luggage a Japanese man is approaching and asks us where we are going, we must look quite desperate by now. He shows us the right way and tells us that we’re kawaii. What a nice welcome! After less than five minutes we finally arrive at our hotel and we can check in. 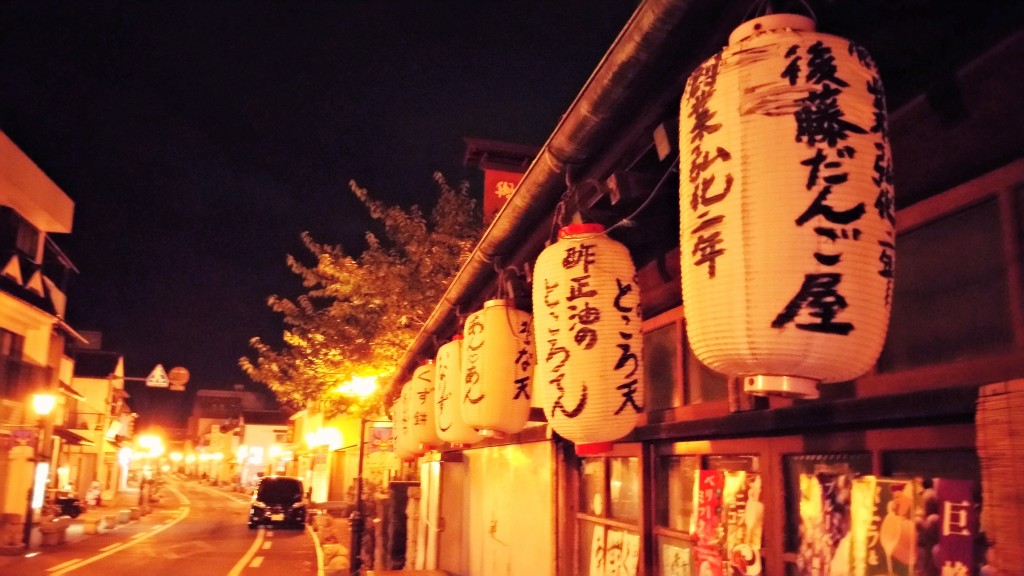 The first thing we do is walking over to Family Mart. Angie has never seen a Konbini before and she’s probably gonna buy anything they offer. Afterwards we want to visit Naritasan Shinshoji but it seems to be quite far. We try to ask two Japanese men where the temple is located but they don’t really speak English. Plus they’re drunk. We don’t want to be considered as impolite tourists so we listen to their talks in a mixture of Japanese and English, I’d call it Jenglish. They’re talking about ghosts wandering around temples at night and that we shouldn’t go there. After bowing slightly we leave in order to find the temple, but we’re too lazy to walk any farther so we decide to buy some more stuff at Lawson and to go back to our hotel. It is 01:00am when we finally lay down and we’re tired as f*ck. Oyasumi nasai, Japan, see you tomorrow! 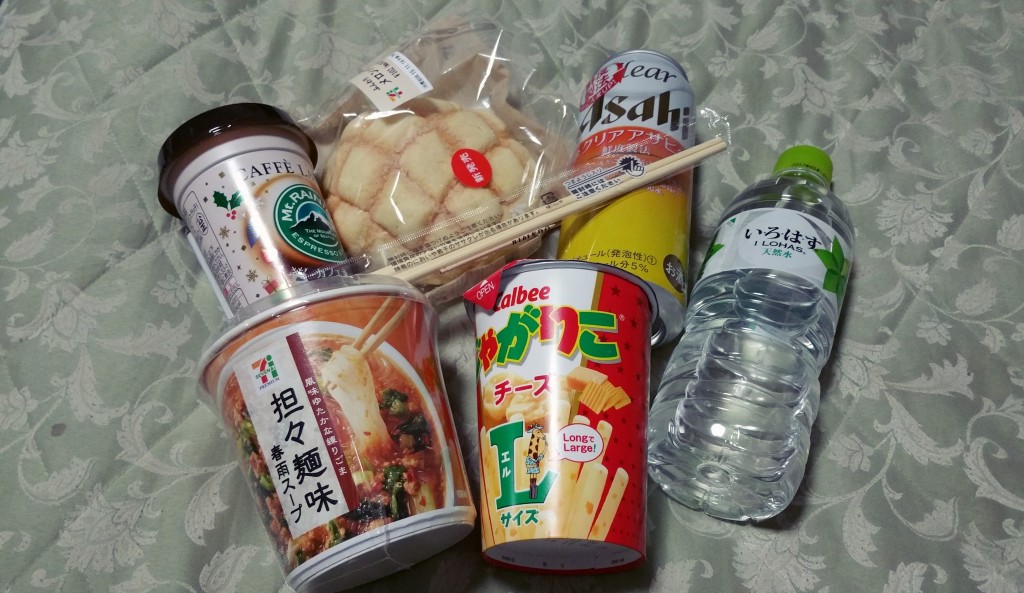